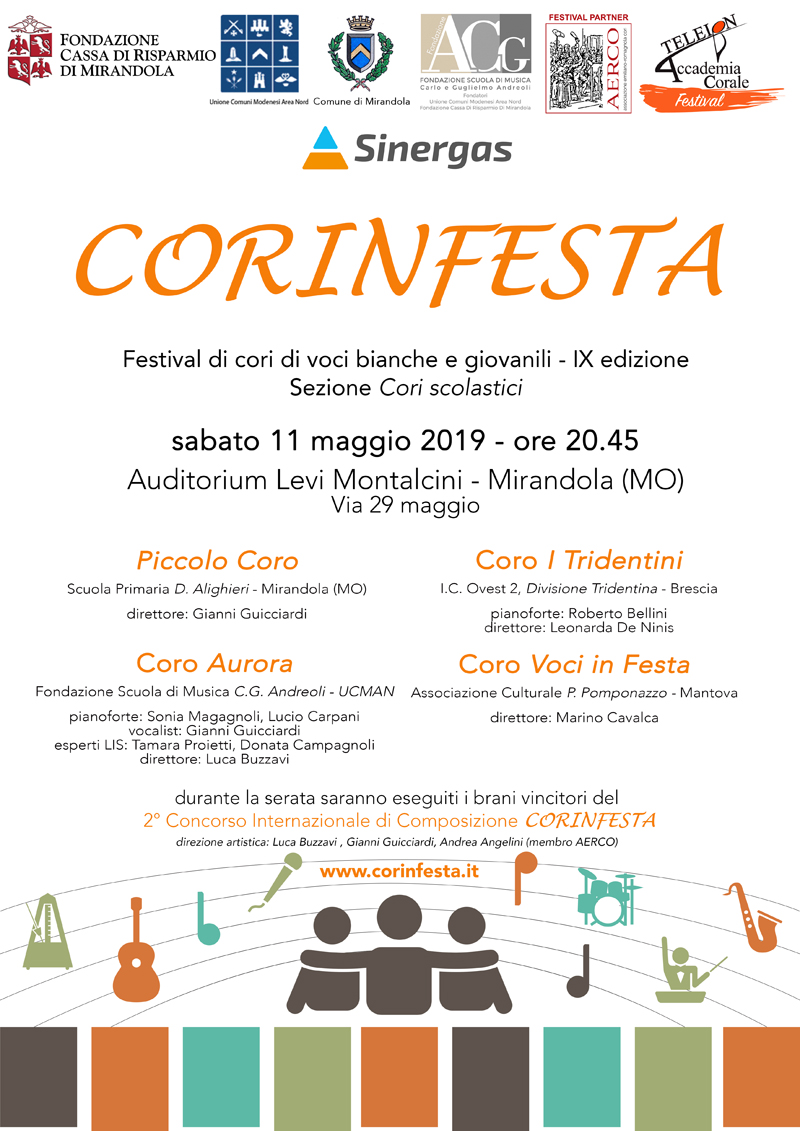 The IX edition of the Festival of choirs of white and youthful voices ‘Corinfesta’ was staged on Saturday 11 May 2019, at 8.45 pm, at the futuristic location of the Aula Magna ‘Levi Montalcini’ in Mirandola (MO).

During the evening the winners of the 2nd International Composition Competition ‘Corinfesta’ were awarded in collaboration between the Andreoli Foundation and Aerco. The Aurora Choir premiered the two pieces: ‘Our Lu-La Song’ by Fé Yuen (Hong Kong) and ‘Carol of the Nativity’ by Giuseppe Cappotto (Italy).

The artistic directors Luca Buzzavi, Gianni Guicciardi and Andrea Angelini (Aerco member) were delighted to welcome the guest choirs and to invite anyone who wants to participate in the event which has the intention of promoting Listening, Friendship and the dissemination of Choral music in childhood and adolescence.

The winning composition of each category will receive a money prize of 1,000 euros (one thousand euros)

Compositions classified at the first, second and third place of each category will be published, with the permission of the authors, in the FarCoro Magazine

All compositions participating at the competition will be published, with the permission of the authors, in a special section of the Corinfesta website

The winning composition of each category will be performed, as a premiere, by the Aurora Choir during the Corinfesta Choral Festival

Andrea Angelini began his piano studies as a child, at the Rimini Lettimi School. He later earned a Doctorate of Music (Piano) at Ferrara’s Frescobaldi Conservatory. After earning a Master in Choral Conducting he studied music therapy with Professor Cremaschi of Milan University. His interests led him to the choral field, and he earned a Bachelor studying at the International Art Academy in Rome with Fulvio Angius. He also studied organ at Pesaro’s Conservatory of Music. Finally he got his PHD in Choral Music at the Cesena Conservatoire of Music. He is the Artistic Director and Conductor of the professional group Musica Ficta Vocal Ensemble that frequently performs in important Festivals in Italy and abroad. For many years, Andrea Angelini has conducted concerts with the choir Carla Amori, in Italy and abroad. Named Director of the Rimini Community Choir, Alessandro Grandi, he led this choir in several performances, including in important venues such as St. Peter’s Basilica in Rome – where he was able to personally meet Pope John Paul II – and in Milan’s Cathedral. He has also conducted the Belarusian National Capella Choir, the Lithuanian Jauna Muzika Choir, the Latvian Ave Sol, the Ukrainian Ave Musica, the Russian Domestik and the Tudor Consort from New Zealand. Dr. Angelini is the Artistic Director of the Choral Festival Voci nei Chiostri held annually in Rimini each spring. He has been member of the Jury at many International Choir’s Competitions in Italy, Europe and Asia. He frequently leads choral workshops in Italy and abroad (Romania, Russia, Belarus, Moldavia, Hungary, Malaysia, Indonesia, Croatia and China). He has been the artistic director and one of the tutors at the Rimini International Choral Workshop, where he taught with Peter Phillips, director of the Tallis Scholars. Mr. Angelini is also the artistic director of the Rimini International Choral Competition, of the Claudio Monteverdi Choral Competition and of the Queen of the Adriatic Sea Choral Festival and Competition and of the Liviu Borlan Choral Festival. He is the Editor of the International Choral Bulletin (ICB), the membership magazine of the IFCM (International Federation for Choral Music). He has written numerous transcriptions and arrangements for choirs and chamber ensembles. His transcription of Faure’s Requiem is published by Gelber Hund Verlag of Berlin. For the American CanticaNOVA Publication, he has prepared transcriptions of important Renaissance Motets. He has published his composition with Eurarte and Ferrimontana. He is a member for Italy of the World Choir Council. Actually he is the President of AERCO, the Emilia-Romagna Regional Association of Choirs. 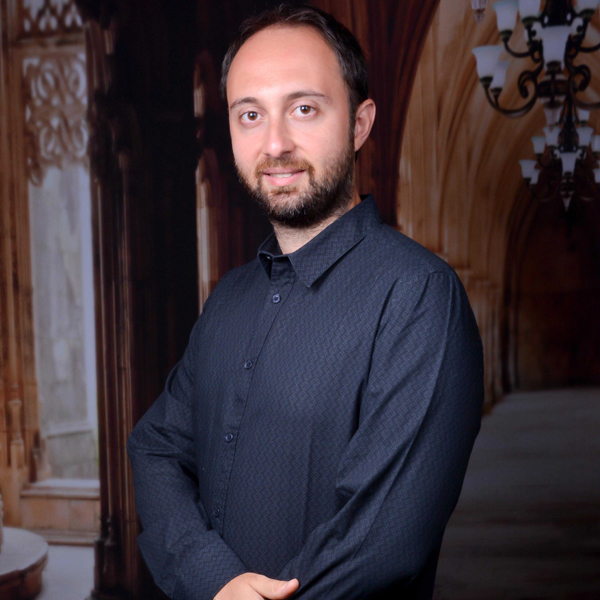 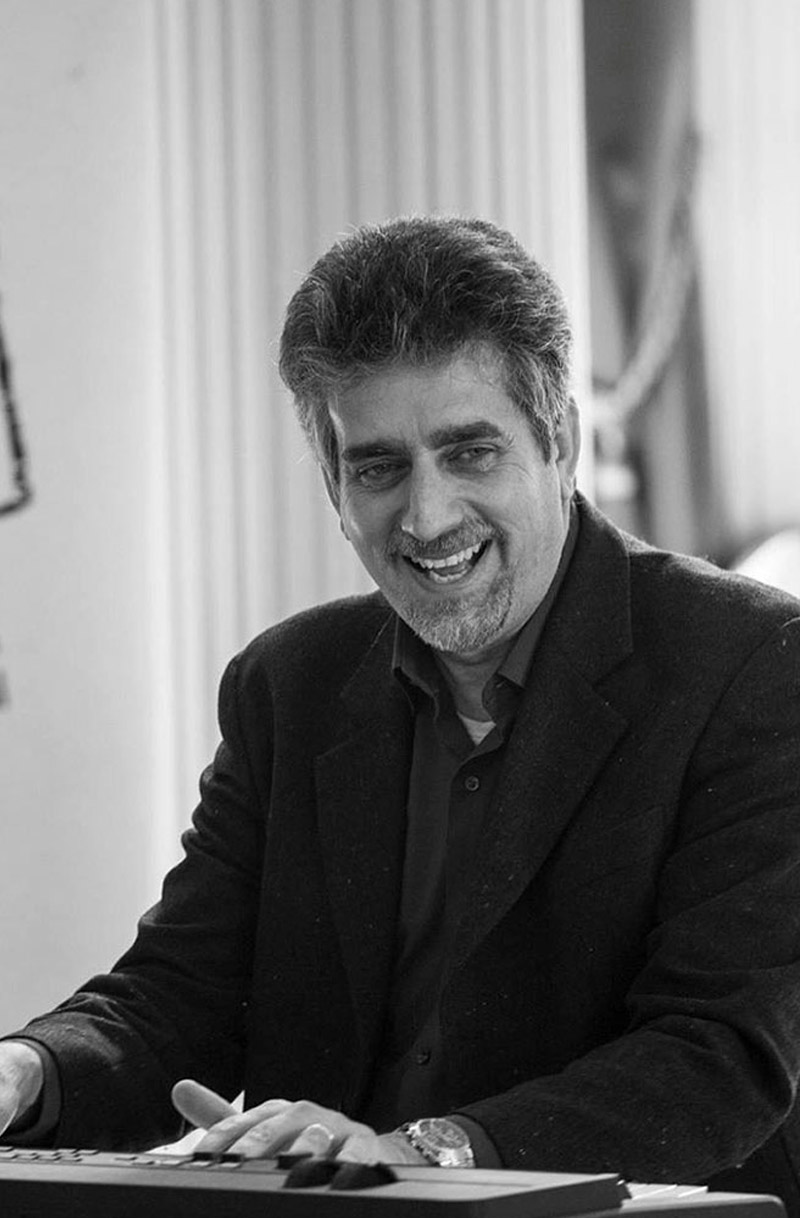 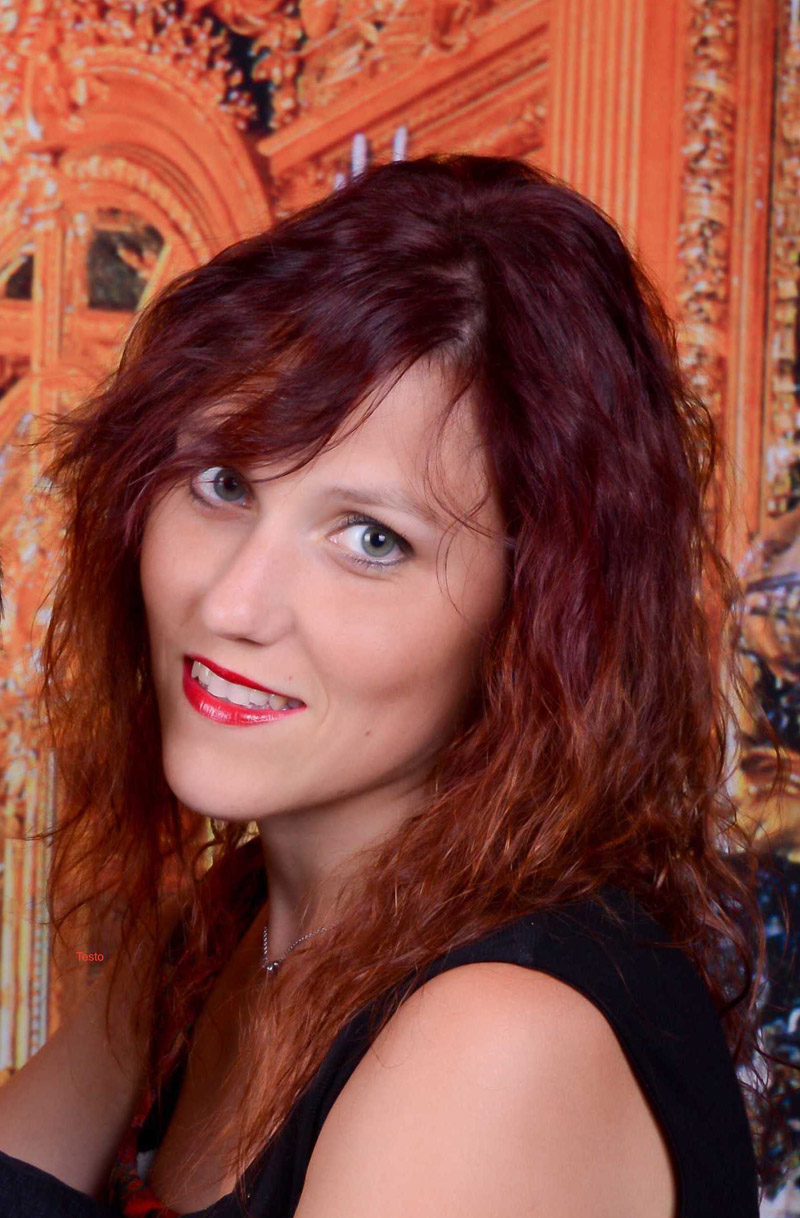 Silvia Biasini, was born in Cesena in 1988. Already began to study piano and composition, she got a Master degree in Choral Conducting and Choral Composition (110 cum laude) in July 2018, at the “GB Martini” Conservatory of Music in Bologna under the guidance of Prof. Pier Paolo Scattolin and Leonardo Lollini. She has attended the Master degree in Choral Conducting ‘Guido d’Arezzo’ under the guidance of Lorenzo Donati, Luigi Marzola, Nicole Corti, Luigi Leo, Carlo Pavese and Peter Broadbent. She also studied in deep choral conducting with Filippo Maria Bressan and Tõnu Kaljuste. Since 2009 she is conductor of the Choir Ecce Novum and the MusiCæsena Vocal Group. She is the artistic director of the Choral Festival ‘Suoni e Colori’, which this year reached its seven edition, for which she directed major events such as the Mozart’s Krönungsmesse and Requiem, the Bach’s Magnificat (January 2019). He has conducted the Corelli Orchestra, the Accademia Malatestiana Orchestra and the Faventia Ensemble Orchestra. In addition to the intense concert activity, she carries out an important work proposing increasingly sought-after and unusual repertoires. He is a teacher at the C. and G. Andreoli School of Music Foundation in Mirandola. Since 2016 he has been a member of the Artistic Commission of AERCO and in the biennium 2017-18 he was the conductor of the Youth Choir of Emilia Romagna with which she performed concerts throughout the region during important events. 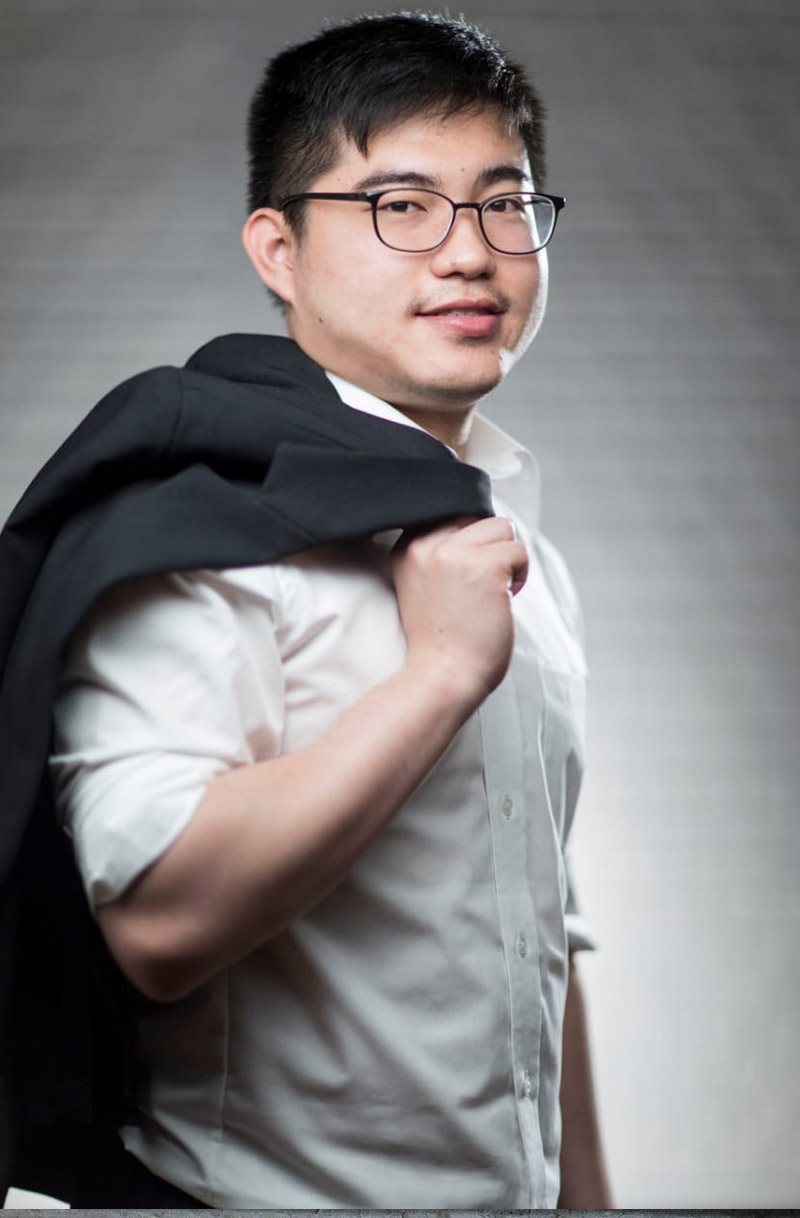 Ken Steven (b.1993) is a young and gifted Indonesian choral composer and conductor. He fuses the exotic colours and elements of Indonesian traditional musical into his works with modern techniques and harmonies. He began his musical journey with Daud Kosasih (one of the Indonesian choral music figures) who inspired and nurtured him. Later, he graduated from The Asian Institute for Liturgy and Music with a Bachelor of Church Music in choral conducting and composition under the tutelage of Francisco F. Feliciano, Ralph Hoffman, and Eudenice Palaruan. While studying in the Philippines, he also studied with many influential musicians such as Arwin Tan, Christopher Borela, and Joel Aquino to name a few. Since returning back to Indonesia, his creative activity and work has made an important contribution to the development of choral music in Indonesia. His music is picking up and starting to make an impact on the international choral scene. Currently, he serves as the Director of Studies at Methodist Charles Wesley School in Medan, Indonesia. He is also the conductor of Medan Community Male Choir, which he founded in 2015 and has led the choir to win many international awards in choral festivals and competitions. 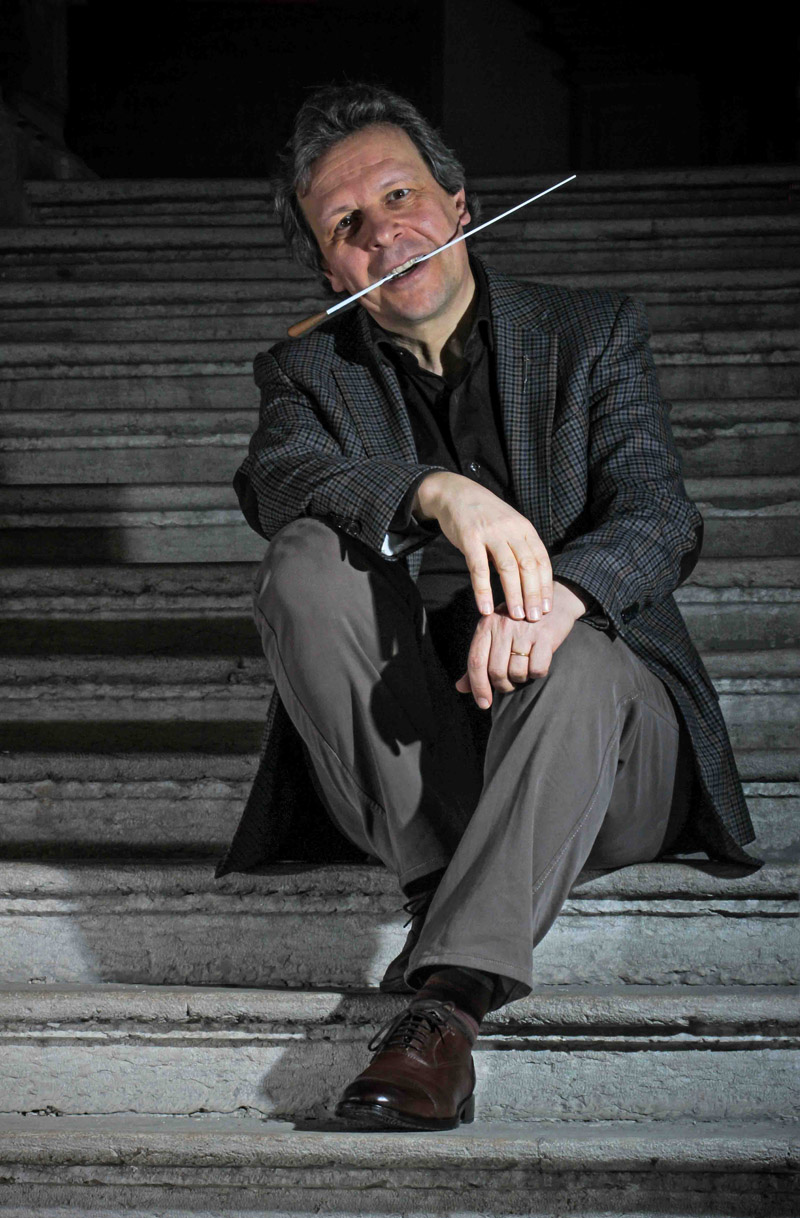 To hear yourself and others, to develop your sense for music, to travel in time, to grow as a person and as an artist, and – why not? – to smile. Based on these principles, I developed my idea of why and how to sing in a choir, starting in 1983 at the Conservatorio di Rovigo, then Trento from 1984 and, finally, in 1993, at Dall’Abaco in Verona. For me, teaching music is not merely an academic activity, but a daily commitment: directing several choirs, holding seminars for conductors and music teachers, and collaborating with professional and non-professional organizations and institutions. I create flexible yet goal-oriented projects to educate the voice, both spoken and sung, and to introduce people to active listening. Moreover, I am very invested in choral projects for school children and, in 1998, I created “Scrivi che ti canto” with the support of the Società del Quartetto di Vicenza. This is a poetry competition where the best compositions are set to music by professional composers, then published and distributed to public schools. Together with the Società del Quartetto, I also promote seminars for school teachers and shoot video lessons (“Fare un bel coro, istruzioni per l’uso”). My compositions, sacred and secular, are a permanent part of the repertoire of many Italian and international choirs and are regularly performed at concerts and international music competitions. They have been published by Sikorski, A Coeur Joie, and Carrara. I set to music R. Dahl’s Charlie and the Chocolate Factory, staged in 2011 at Teatro Malibran, Venice. In 2017, I composed ‘L’Annunciazione’, a Marian cantata for choirs and ensemble, based on a poem by P. P. Pasolini. Beyond my forty-year experience as a teacher at the Conservatorio, I personally conducted choirs and orchestras in vocal and/or instrumental projects. I have also published the choral conducting handbook Esperienze Corali (Bergamo: Carrara, 2012), which has become the reference text in many Italian music schools and has been adopted by several choir conductors over the years. 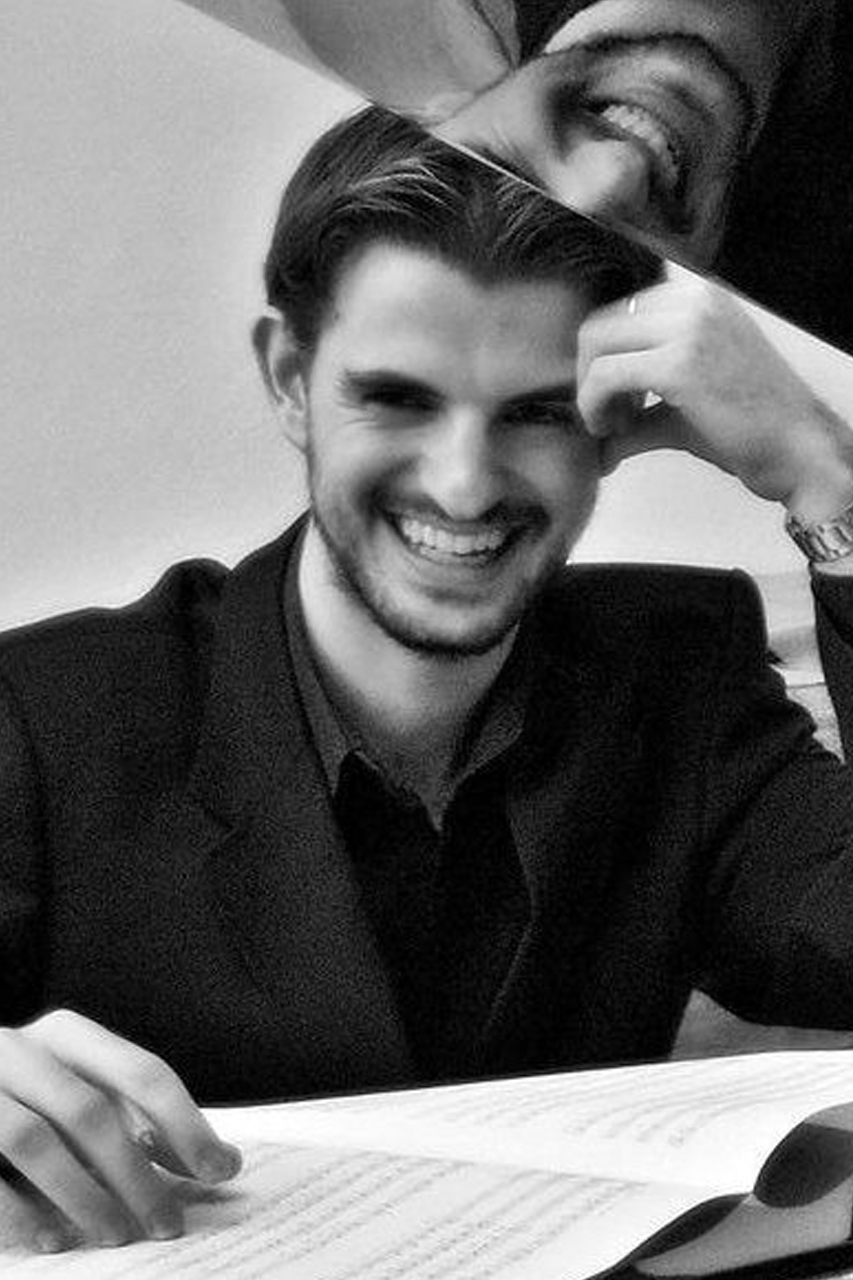 Francisco Carbonell (Valencia, Spain) completed his studies in Composition at the Conservatory of Music of Valencia, where he also studied Orchestra Conducting and Organ. He moved to Rome to continue his studies in Composition at the Pontifical Institute of Sacred Music, where he obtained the highest level of qualification, Summa cum Laude. He also studied Organ, Gregorian Chant, Piano, Liturgy, Latin and Choral Conducting at the same institute. He has been a member of the Cappella Giulia, the choir of St. Peter’s Basilica in Rome for two years. He served as an organist in many churches in Rome like the papal basilica of St. Lawrence or the church of the church of the Pantheon. He is currently the Music Director and Organist at St. John the Evangelist Catholic Church in Indianapolis, Indiana; the oldest catholic church in the city and the former cathedral. Francisco has been awarded in many international composition competitions and his music has been performed in Australia, England, Finland, Germany, Italy, Japan, Norway, Poland, Scotland, Spain and United States by prestigious choirs such as the Youth Choir Kamer from Latvia, the Christ Church Cathedral Choir in Oxford and The Australian Voices. He has been commissioned by the choirs of Bristol and Oxford cathedrals in England and the University of Valencia, Spain. He has been member of the jury at the Rimini International Choral Competition and he is currently working on his doctoral thesis at the Pontifical Institute of Sacred Music in Rome, on the sacred music of Francis Poulenc. Francisco is married with three daughters. He enjoys spending time with his family and friends, traveling, cycling, being in nature, listening to good music and reading.

To participate in the next edition of the International Competition for Children’s Choir Composition, fill out the online form.